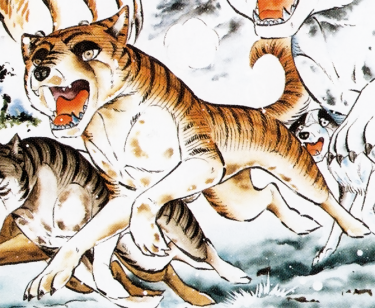 Akatora is a member of the Ōu Army and of the Kai Brothers.

He is the first-born brother of Chūtora, Kurotora and two unnamed siblings and is the uncle of Buru, Dodo, Harutora, Kagetora, Nobutora, Shigure and Shōji.

Akatora is a red brindle Kai dog with red fur, white urajiro colouring and black stripes. His eye color is amber but is also recognizable as a light brown.

The differences between him and his brothers is his fur colour and him having both ears and both eyes left. Since Ginga Densetsu Weed, he had a slight re-design and got different face markings. But this refers to his brotehrs too.

In the GNG Anime, he was fully red while in the GNG Manga he has a paler underbelly. On coloured images his underbelly is shown white or in a cream tone.

Akatora is quick-tempered and violent but he’s also very brave, just like his brothers. But he’s still the most reasonable of all of them. After joining the Ōu Army the three brothers become thoroughly kinder and learn to listen to thair friends words, what often stops them from bad decisions like running in the arms of their opponent.

The three trust each other with their lives and in battles they work together as if they’re a single being. They also trust and respect their life savior Ben greatly and they’re always ready to die for him without any doubts.

As the oldest brother, Akatora is the leader of the Kai trio, being protective with his brothers. But still not that much though as he knows that they can fight just as well as he can. Akatora is also the most sensible one of them, knowing that it’s sometimes better to run away than fight. He shows his sensitive side, crying a bit when he thought that his brothers died.

Also he can be slightly overly confident, but he is very brave and strong. He is fiercely loyal and fearless, is not afraid to die and accepts his fate when it turns out bad for him.

Akatora often sneers at Moss and calls him fat, but their insults to each other turn more friendly after they become closer. Akatora and his brothers start to call him grandpa Moss, instead, still liking to annoy him a bit. This shows that he also has a funny side.

Being just a month old, Akatora and his two brothers, Kurotora and Chutora, were abandoned out of five siblings, in the mountains by their owner.

They had to care for themselves in the wild and were attacked by a marten, who took out Kurotora’s eye and ripped off Chūtora’s ear. Luckily, before any more injury could be sustained, Ben came to their rescue and scared the marten away. He then daily cared for them, brought them food and raised them until the day they finally were able to care for themselves. On that day he came to bring them food but instead he found them fighting against a big snake although they still were small puppies. He saw the unbelievable strength of the little Kai brothers.

4 years later they meet Ben again, and this time with his platoon. But they didn’t recognize him and started to attack him and his pack. They didn’t stop fighting until they realized that it is Ben; the dog who saved them earlier.

After that the Kai Brothers joined Ben’s platoon and told him about Moss, as a suggestion for finding males. They met other strong dogs time after time, for example Akame or Benizakura. Akatora and his brothers were a great help in finding and encourage them. Before the final battle began the soldiers returned home to meet their leader Riki and to get his instructions.

During the battle against Akakabuto, Akatora’s eye and the half of his face is gouged out by the bear’s claws. Thinking that there’s only one way left to do at this state, Akatora jumps at Akakabuto and sacrifices himself. He takes his revenge by biting the remaining eye of his enemy, permanently blinding him. As a cause, Akakabuto impales him with his claws, tears off his left leg and smashes him on the ground. Akatora had lost too much blood and he died as a hero in front of his crying comrades. (In the early manga version his leg isn’t shown torn off)

Although Akatora is dead, he is mentioned many times by his brother Kurotora and his nephew Kagetora. He is told as a hero among the Kai generation.

He appeared in flashbacks throughout the story, each time showing his heroic death where he ripped out Akakabuto’s eye.

It’s mentioned by the narrator that his soul lives in his nephews (Shouji, Buru, Dodo, and Shigure) and gives them courage to fight Genba’s minions.

In the final Battle against the evil dog Hōgen, Akatora appears as a ghost along with the spirits of the other Ōu Soldiers as a stand by for Weed.

Akatora appeared with all the deceased Ōu Soldiers in Moss’s dream, shortly before his death. They welcome him into heaven and tell him to stay with them. Moss really likes that offer and goes with them voluntarily.