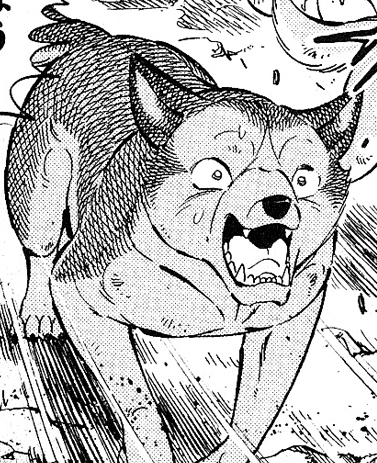 They’re the offspring of Jerome and Lydia, and the sibling of Lenov, Maru, Sunny, Tetsuo and Tonov.

After the hybrid bear crisis, Jerome and Lydia got 6 pups: four males and two females. One of them was Akira. They and their siblings were born in autumn in Futago Pass, three days after the birth of Weed’s and Koyuki’s pups Bellatrix, Orion, Rigel and Sirius.

When a volcano erupts in Ōu, the dogs are forced to flee. Akira is too small to run fast enough and is carried by the Ōu army to safety but they pass out from the smoke and ash in the air. Jinemon Kurohabaki finds them and takes them to an abandoned mine where he locks them up. Akira and the others are later released by Daisuke who acquires the key from Jinemon.

In the end of Ginga Densetsu Weed: Orion they and their siblings are watching the fight against Masamune Kurohabaki.

A few months have passed since the defeat of Masamune Kurohabaki and the land is at peace, until Akakabuto’s son, Monsoon, attacks the land and begins to kill the dogs, wanting to claim back the land that he believes is rightfully his. In the conflict, Lenov is crushed and killed by one of the bears, and Akira, ignoring Cross’s orders to fall back, rushes in the help their mother and brother but is slashed and killed by the bears as well.