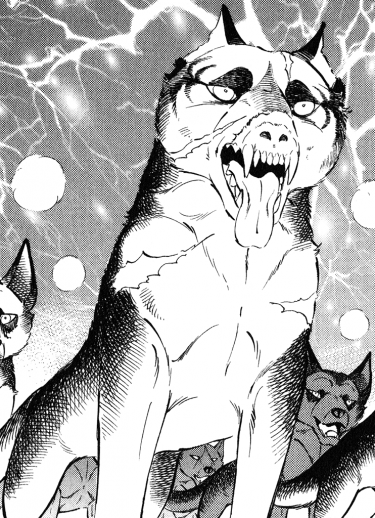 Major Aram is a main character of Ginga Densetsu Weed in the Russian Arc.

He is one of the three majors of the war dogs of the Russian Army and their second platoon leader.

Aram is a German shepherd with facial markings similar to John. He is covered in large scars, mostly from the Soviet war and is missing his ears and flesh around his nose and muzzle, both cut off with a knife from an enemy soldier in the war.

He is the most blood-thirsty and ruthless of the majors, as he is very eager to kill and gives no mercy to anyone. However, he used to be a kind-hearted dog, and even after his change he respects Maxim a lot for saving his life in war.

When Aram was still in the Russian Army, he had a kind heart and he once saved the life of an enemy soldier dog because he believed the soldier was too young to die. Instead of showing gratitude, the young enemy soldier came back with reinforcements, and Aram’s soldiers were all killed. A Russian soldier caught Aram and tore off both his ears and the skin of his muzzle for killing his beloved dog, but at that moment, Maxim’s platoon came to the aid of Aram’s and fought off the enemies. Aram was thankful for Maxim and they became close friends. Because of his past experiences, Aram became a ruthless soldier who doesn’t hesitate to kill, including women and children. He is also known for his strong bite, and no enemy has ever escaped from his menacing grip.

During the invasion of Hokkaido, he and Victor planned to kill all dogs, unlike Maxim who believed women and children shouldn’t be slaughtered meaninglessly. Before Victor finished him off, Aram clashed fangs with Hakurō from Kitami. Hakurō got a bite into his muzzle, which Aram did not like at all. The enraged Aram and Hakurō spun around violently to snap the other’s jaw, but Hakurō suddenly spun around in the other direction they were spinning. Aram lets go from the agony and was about to lose, but the other Russian dogs interfered. It was the first time Aram felt fear against the enemy.

At first, Aram seems like an evil dog, but as time goes on, he gets influenced by Maxim, who started to question the meaning of their invasion. After exchanging several short fights and conversations with the Ōu Army, Aram’s sense of justice starts coming back to him. He was in great emotional turmoil, for he was ordered by Viktor to kill his great friend Maxim. But later on, when it was revealed that Maxim was not dead, he makes up his mind and decides to make up for all his evil deeds by killing himself in the process of killing Victor.

In the final battle, Weed was unable to finish Victor off, so Aram went after the fleeing Victor. He easily catches up, and drags him into the water. With his fangs clamped into Victor’s leg, he wraps some seaweed around his legs so that the two of them can never go back to the surface. Slowly, the two die from drowning. When Maxim was about to drown in the storm on his way back to Russia, Aram’s spirit came to his aid and gave him courage to live.