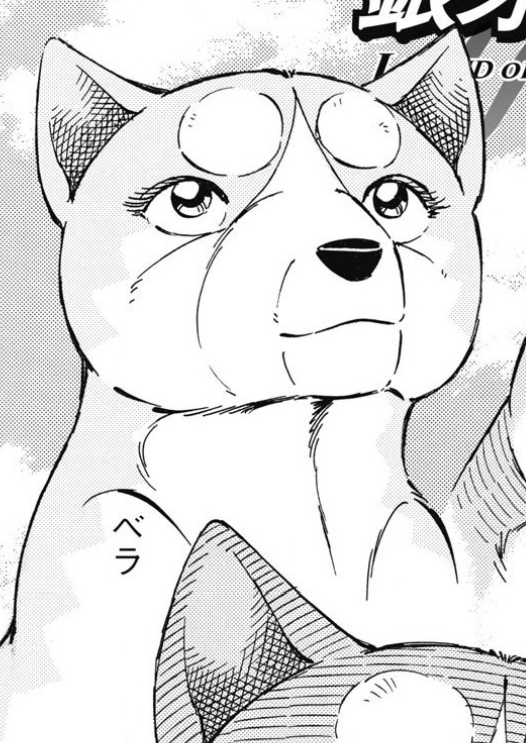 Bellatrix – better known as Bella – is a minor character of Ginga Densetsu Weed: Orion and Ginga: The Last Wars. She also got a role as a main character in Ginga: The First Wars.

She is a pet dog and also a member of the Ōu Army. Just like her siblings, she is named by Gin’s former owner, Daisuke.

Bella is a Kishu/Akita mix with silver-blue brindle markings. She has typical urajiro colouring, while her stripes are very faint. She has white dot markings above her eyes. Bella’s eyes are large with medium blue-coloured irises, and eyelashes around them.

After living as a pet dog, she has a collar around her neck.

In GTLW, she has a resemblance to her great-great-grandfather Shiro.

Being the only daughter, Bellatrix is a bit whiny and timid. She is often bullied by her brothers Orion and Rigel, and stood up for by Sirius, the eldest brother.

Just like her father Weed, she is polite and brave. Especially when she braves the wild to find her family.

In Ginga: The Last Wars, Bella is strong-willed and may scold her brothers. Just like her brothers she is willing to help anyone in trouble.

She is also obedient and understanding when Orion tells her watch over Akame with their mother seeing that fighting bears isn’t for her.

Bellatrix makes a minor appearance in the end of the series, as she is born as the youngest child and only daughter of Weed and Koyuki.

Bellatrix is named by Daisuke after he sees the puppy looking at the stars of the night sky.

In the beginning, Bella, along with her siblings, came down to a river to see Daisuke and Hidetoshi. They offered fish to Bella and her siblings. Afterwards, her parents, Weed and Koyuki, called her back home.

During the volcanic eruption in Ohu, Sasuke was given the task to look after Bella and her older siblings Sirius and Rigel. Sasuke and Weed’s four pups manage to survive the catastrophe and find an abandoned shed, where the puppies can be safe from the snow. While their baby-sitter scouted the area to search for any survivors, after her brothers left she followed them.

But she gets lost in the snow and begins to cry until she is found by Izou and his brothers. They agree to help her but Bella is napped by an enemy dog as soon as the brothers stopped him. Bellatrix is taken captive the enemy dog’s pack mate until Shirozaru and his brothers arrive.

With Bella safe, Muu and Rara take her back to the shed and keep her warm. Until Izou comes back to see that she is safe and sound.

Then, a while later Bellatrix is reunited with her brother Orion who she’s happy to see, but with trouble brewing Muu and Rara escort Bella to safety.

Her Life as a Pet

She currently lives in safety as a pet dog and Rara’s neighbor. She is called “Chiko” by her new owners.

As she is living as a pet, she begins to miss her family until she gets a visit from her brother Orion and Shirozaru whilst in the care of humans. After a while, she decides to be brave and venture back into the wild to find her family.

She gets lost in the mountains and begins to cry but is spotted by Kamakiri’s former mate and her family, who agree to accompany her along the way. Soon, she finds her brothers and father and reunites with them.

Bella is now a year old, and she’s with her mother and her brothers in the Akame Mountains and has been so for 6 months, when Akame arrives and gives the message that Ou has fallen because of Monsoon. Bella would like to follow her brothers and help, but they tell her to stay and take care of Akame with Koyuki.

Once Akame wakes up she leaves with her mother to keep a close eye on him on his way back to Ou but she and Koyuki were told to stay in the Akame mountains.

When Daisuke reunites with Orion and his brothers he ask where’s Bella but her brothers know that she is safe with their mother in the Akame mountains.

She is still living in the Akame Mountains with her mother.