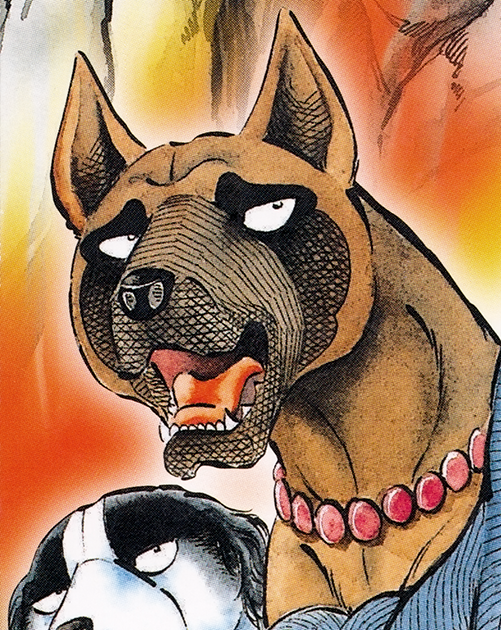 Ben is the leader of the first platoon in Riki’s pack. He is one of his most loyal, strongest and closest followers.

He is the mate of Cross and the father of George, Ken and Minnie.

Ben is a large, muscular Great Dane, and is mainly a light brown with black splotches around his eyes. He has a dark brown snout, and wears a red beaded collar.

He has cropped ears and a collar, showing his past as a pet dog. His collar is red, but for some reason it’s portrayed a greenish gray in GDW anime.

Ben is a dog with great physical and mental strength. He has unusual endurance, bravery, wisdom and sense of honor.

He is extremely loyal to his leader Riki and his mission, viewing it as his reason to live. Riki trusts him greatly and cares of him, making it odd why Sniper is his right hand instead of Ben.

He respects dogs with resilience and bravery. He is very impressed by Gin’s skill and nature, but the younger dog is still quite young and Ben often guides him. Ben is willing to entrust Gin with the first platoon leader role after he loses his sight, knowing he would be a great leader.

Ben has a very kind heart. He has mentioned himself that he dislikes killing and tends to give the criminals another chance instead. He has often helped and saved other dogs. He saved the young Kai Brothers and took care of them until they could survive on their own. He also helped Akame escape after he was caged by his owner. Ben’s owner seems to trust and understand his dog very well and it seems like that he sometimes lets Ben wander by himself.

Ben is at the times a bit comically under Cross’s thumb and doesn’t want to make her angry. Eventually, the two fall in love and have puppies together. While other dogs are unaware of her being pregnant at first, it seems that Cross told Ben about it. Ben wants to protect his family in the battle against Akakabuto no matter what. He is protective father and shows his pups affection.

In Ginga Densetsu Weed, Ben has turned completely blind and also senile from age. Cross takes good care of him. Sometimes he starts to wander, not realizing where he is going, and doesn’t recognize things like he used to. Sometimes he might turn a bit angry or stubborn due to his inability to remember and understand things clearly.

In the GDW anime, his senility was turned more comical, while it has more sad and serious tone in the manga. Generally, his mind is more clear in the anime. Yet, he is oddly grumpy and aggressive in GDW anime, not matching his personality in manga.

Ben was the leader of the first platoon. He possesses unusual strength and the ability to recuperate incredibly quickly. He is also the role model to Gin as it is shown through out the manga and the anime. Gin discovers the wild dogs one night and after being tested by them, Ben allows Gin to come with them, they go back to Riki who tells them about the battle with Akakabuto and tells the pack to find more dogs.

They first met the Kai Brothers: Akatora, Chutora and Kurotora. Then they met Moss, In the battle against him, Ben was crushed and almost killed by a big boulder that was pushed at them. But luckily, Ben survived. He was blinded by poison in a trap set by Akame who was led to believe that Ben’s group were outsiders helping Kurojaki. However, before he lost his sight, Ben turned his platoon over to Gin, believing he would be the best suited as the leader.

After returning to his old owner and getting medical treatment, Ben recovered some of his sight so he could participate in the final battle.

Only short time before the battle, Cross gives birth to his puppies. He had two sons, George and Ken and one daughter, Minnie.

On his way to help Riki find Akakabuto, Ben lost his sight again and was approached by Sniper. Ben realized that the only way to defeat Sniper was to sacrifice himself.

He threw himself into a river, taking Sniper with him. Hyena fought Sniper so Ben could get away, so Ben managed to survive and was later found by Gin inside an old house. From there, Ben went to fight the bears to help Gin.

In the final battle, Ben was the first dog to attack Akakabuto, disobeying Riki’s orders to do so. He was then saved by Gin from being killed by the bear.

Despite his severe wounds, Ben survives the final battle but he also turns completely blind. Ben stays in the Ōu mountains with his family and friends.

When the mysterious wolves kidnap his mate Cross and their puppies, Ben and others go to search for her and has to face wolf warriors one at the time in order to reach her. Ben is blind and thus at the times guided by Akame, but he is also great help as he is able to sense and “see” through the odd illusions and tricks the wolves create. He gives other useful information to young Gin and teaches him in various ways.

While Kurotora distracts the guards, Ben goes inside the Reima’s Palace with Gin and Akame. They face powerful gatekeeper Mukonga who manages to defeat both Gin and Akame, but not before Akame manages to blind the wolf. Being both blind and powerful canines, Ben and Mukonga have a long fight. Mukonga uses his techniques but Ben finally wins, being a stronger canine. Mukonga is so impressed that he lets them go to meet the wolf lord Reima.

Reima tells them that their true enemy is an evil wolf lord Gaia. It also turns out that Ben is the Geki warrior, meaning that he is a descendant of an original Hakkenshi Of Sirius and the true user of Geki Sentsūhi-Battōga. Ben accepts this but believes that Mukonga is the one who deserves the title. Ben is sad when Mukonga died and honors his memory.

When the army swims to Hokkaido to face Gaia’s Empire, Ben suddenly starts to see again. This is thanks to Mukonga’s Battouga which hit him on the right spot and slowly made his eyesight recover.

Ben fights the evil Geki user Bighorn and kills him after the wolf continues to use the title though Ben tells him that it’s Mukonga’s alone.

Next, they face Gaia who is a very powerful opponent. Ben bravely and persistently protects Gin despite his own wounds. After the battle, Ben returns to Ōu and is happy to see his family again.

Ben is one of the oldest of the surviving Ōu soldiers from the battle with Akakabuto. Upon his old age, he has returned to Kofu with his mate Cross. He has turned senile and often forgets things and Cross constantly needs to watch over him.

After a series of gruesome nightmares, he returns to Ōu only to find his old friend, John, dead. He brings him back to Kofu and his owner gives John a proper burial.

Despite his age and his blindness, he and Cross decide to return to Ōu to help out the younger generation in their battle against Hougen.

In the anime, his nightmares and the burial of John were absent. Ben is portrayed as a comic relief for his senile nature and he was the one who also motivated Ken and Kagetora to fight Batto.

Ben dies of old age and later on, his spirit is seen guiding Ken when George was in trouble battling the Hybrid Bear.

He appears to flashback. Young Ben brought a wounded Cross to him, because he knew Unsai to be a reliable and fair male. Unsai had to take good care of her and fell in love. Ben came to meet with Cross whenever he could, and Unsai soon realized that the Cross loved Ben and not him. When Cross healed, she left Unsai to join Ben in the Ōu Army.

Later, Ken is struggling in a raging river, unable to swim due to a bone fracture caused by the bears, when the spirits of Ben and Minnie appear to him.

Ben was seen in the afterlife along with Benizakura and John, surprised to see their old comrade Hyena here with them. Surprised to find Hyena still here the great dane agreed with his comrades that it’s not the wiemeraner’s time to join them yet as he still had a duty to finished and pushed his old comrade to go back.