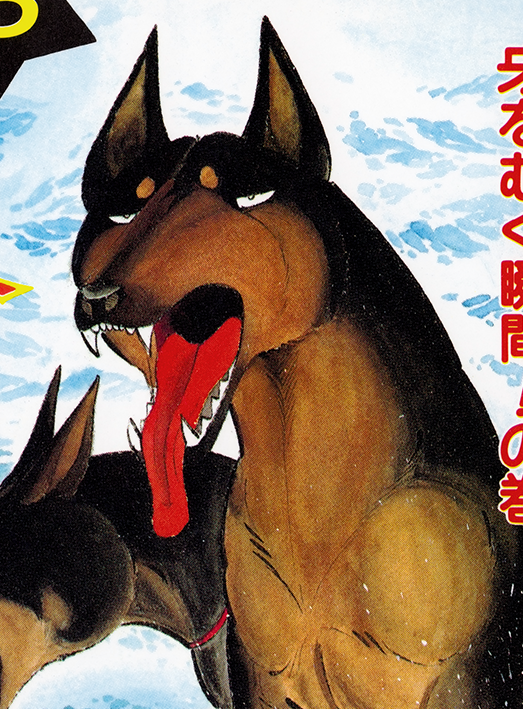 Bill – also known as the Wandering Bandit Bill – is a minor character of Ginga: Nagareboshi Gin.

He was the dreaded leader of a pack of 200 mountain dogs on the island of Shikoku.

Bill is a black-and-brown Doberman with black eyes. He has no collar but he has cropped ears. His belly was more like reddish-brown while for example, Sniper’s belly was just brown.

Bill is short-tempered, and despite his reputation as a criminal, he has a sophisticated side. He is a true gentleman towards females, like seen with Cross, and he also treats his visitors well. However, he hates intruders. After befriending and joining the Ōu Army, he insists to make them sleeping places and orders his minions to work. Bill is a proud resident of Shikoku and proud of being a Doberman, this being one of the reasons why he quickly befriends Sniper the Doberman. However, he dislikes his low tricks and cowardice, soon losing the respect towards him and proving that he has a sense of honor. He is often annoyed by his young minions, calling them “kids of these days”. He excepts good manners and work from them. He also hates being woken up and has made strict time schedules. Still, he also has a certain sense of humor.

Bill was visited by Sniper who tricked him to believe that the Ohu dogs want to have his territory. Later, he watched as Gin defeats Sniper and decides to join the group along with his own pack of dogs to fight against Akakabuto.

Not long after the defeat of Akakabuto, Bill goes back to his territory. He gets killed by Ten Fighters Of The Underworld after refusing to tell them the location of Gin and attacking them.

Bill appears in the dream of a dying Moss. Along with other soldiers, including Riki, John, Terry, Hyena, Smith, and Great. He welcomes Moss into afterlife.