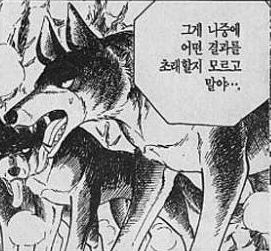 Black Wolf is a flashback character of Ginga: Nagareboshi Gin in the Wolf Arc.

He is the first known leader of the Army of Black Wolf’s Empire, all consisting of black wolves.

He is Gaia’s ancestor and Gaō’s enemy.

Around 100 years ago, Black Wolf’s pack in Hokkaido had fights with Gaō’s pack about territory and prey. When humans came and threatened his pack, he went to Gaō’s Underworld kingdom to ask for help. Despite their earlier enmity, Gaō let them in since he understood how bad situation they were in and felt sorry for them. However, Black Wolf was evil and his kin plotted to take over the Demon World for generations. Purple Wolf, his ninth-generation descendant, succeeded in this.