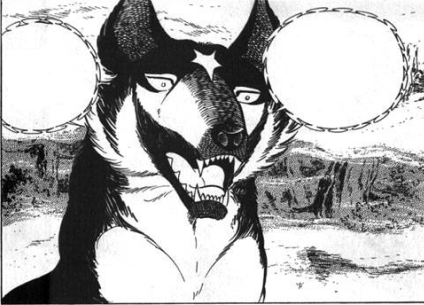 Blacksnake is a main character of Ginga: Nagareboshi Gin in the Wolf Arc.

He is an army member of Black Wolf’s Empire, acting as a Hakkenshi of Darkness and a Zetsu warrior. He is the strongest of the Hakkenshi and works as their leader figure.

He has a star-shaped scar on his forehead as a sign of this.

Blacksnake was trained by Juga to be a a hakkenshi of Sirius. Just like the other hakkenshi of Gaia, he believed he was a true hakkenshi.

He awaits Gin’s groups arrival in the Underworld. After White Tiger and Bighorn get killed, Blacksnake decides to fight Gin who is a Zetsu warrior. At first Blacksnake underestimates Gin due to his youth and small size but the young Akita turns out to be a strong opponent. Gin cuts off his fangs and defeats him by chancing the rotation of his Battōga. Ashamed, he tries to attack Gin again, believing that the death is better option but he is stopped by Juga. He is very afraid when Juga mentions that Gaia is very angry with his failure. When he tries to stop Gin from following Juga, he is knocked aside and eventually defeated by Raiga, Sakon and Ukon. He is not seen again after this and likely died during the earthquake which destroyed the Underworld.