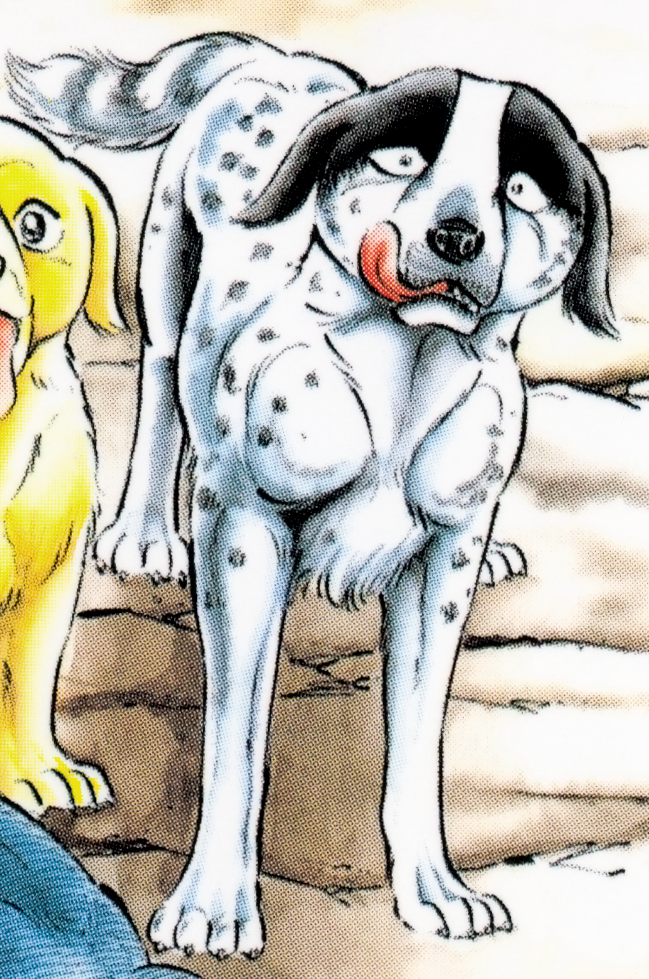 GB is a main character of Ginga Densetsu Weed.

He is one of the officers of the Ōu Army and one of the best trackers and runners there. He is Weed’s name giver and works as his guardian and protector.

GB was at first a cowardly dog, submissive and slightly selfish, but had a sense of justice. He felt he had no strength nor hope to follow it. He did not have much hope in the sense of righteousness, until he met Weed and found purpose in his life.

At first, he believes that you cannot survive in the world by always helping others and doing good and has quarrels with Weed, who would always want to help. Slowly, GB realizes that the world doesn’t change if you don’t change yourself first.

GB starts to have more courage and rightfulness, but he’s still afraid if situations get too bad, and starts to doubt himself. In the beginning of the series, he sometimes uses lying and tricks in order to look stronger and get away from trouble.

He cares a lot about Weed and at first is constantly worried for him. However, it turns more into respect after Weed gets older. Still, he is occasionally a bit jealous when Weed gives others attention and ignores him. The dog GB respects more than anyone else is Smith, and he blames himself for his death.

GB is often a pessimistic and cynical dog, doubting himself and the goodness and intentions of others. He is also known to doubt the goodness of humans, though he knows there’s good and bad ones. Still, he occassionally shows his optimistic side, believing that there’s always hope.

GB was once a pet dog. He lived a very happy life until the day his master abandoned him and committed suicide from depression. When the ambulance came to take his master to the hospital, GB chased after it to find out where the ambulance was taking his master. He lost his way on the road and he was about to be hit by a truck when Smith jumped in and saved his life, which cost the old Ohu soldier his front left leg. After that day he called him Uncle Smith.

With nowhere to live, GB became a runner under the command of Nero. A few years back, GB discovered some abandoned puppies in the mountains and decided to take them to Nero for protection. However, that very day, the leader of the Southern Alps, Hōgen, had come down. Hougen got furious when he saw the puppies, because he thought Nero’s pack was keeping females from him. He commands Nero to kill the puppies right in front of GB. That memory kept haunting GB and reminded him of the coward he is.

GB decides to leave Nero when he meets the puppy, Weed, who was hunting for birds to feed his sick mother, Sakura. As Sakura dies, GB promised to take care of Weed and guide him to the Ohu mountains. During the journey, GB shows his true colors as a coward, who rather follows Weed to Ohu to save himself (especially in one incident, he ran away when Weed helped the sick female Golden Retriever, Lenny) more than to help Weed. GB is a very loyal dog, but not a good fighter. However, he sometimes show that he has courage and a sense of justice too.

GB stays loyal to Weed throughout the story, but doesn’t have any big moments as he spends most of the time in the manga as a comic relief like Sasuke.

GB, Weed, Sasuke, and Kyōshirō run to the South to investigate the happenings. When Weed needs reinforcements to fight the baboon Shōgun, GB runs off to another.

There he finds Buruge and takes him to the final battle where they fight the baboon general alongside each other.

He spends most of the time recruiting reinforcements and convincing Weed to go to Hokkaido to save Gin’s pack from Victor.

GB and his friends follow Weed to the place he left Koyuki and Kotetsu. They also encounter the bears and, upon meeting Weed, they tell him about the dangers in the forest. Battles after battles followed with the huge bears. GB had fallen victim to the Third Hybrid as its claws struck down his thin back. Weed ordered GB to be taken away so he can recover, against his own will. Sasuke takes him away and they stay in the nearby forest, GB constantly trying to walk but failing to do so. He tries to make his way back to Weed to protect him but Sasuke grabs his back leg to hold him back. GB bites onto a branch to fight back only for it to snap and send him flying onto his injured back again, knocking him out.

Finally, he convinces Sasuke to take him down to see Weed, and seeing his friends in danger, he musters the strength to charge at the bear and bite its claw. The bear swipes at GB just as he bites down, causing the claws to go clean through his back and side. Despite this, GB manages to tear off one of the claws and sends the bear into a fit of pain and rage, which causes it to fall off the cliff for a short time. Weed rushes over to GB, who is dying, and listens to his last request: a hug. Tearfully, Weed hugs his closest friend as the Ou army cry. GB admits he is scared of dying but thanks Weed for all he’s done since they met, and he dies in his arms. Weed howls over his body and swears revenge.

After the death of the bear, GB is buried where he died and the Ou army sleep around his grave while they wait for Weed to return. When he doesn’t, they make the choice to move on, leaving GB to look over the mountains. Sasuke, however, stays behind refusing to leave without Weed and Jerome and also wanting to stay with GB. Soon, Weed returns with Jerome and they spend some time by GB’s grave before leaving him to rejoin the Ou army.

GB was living as part of Nero’s pack of stray dogs when he first met Weed (then without a name). GB and Weed were both stalking the same pigeon. Although it was GB who killed it, Weed attempted to steal it from him. GB then pinned Weed to the ground. Weed explained that he was gathering food for his mother, and out of sympathy GB allowed him to take the bird, telling the puppy to take his mother and leave the area, because if Nero found out he would kill them.

When GB returned to Nero empty-pawed, he was savagely attacked by Nero. Nero allowed him to live for the fact that Nero now craved “bird-meat,” and told him to and kill some ducks from the nearby farm or GB would be killed in punishment. However, the ducks were protected by the huge and aggressive Tosa guard dog.

GB took the cowards’ way out and sent the immature and naive Sasuke to kill a duck (using him as a distraction), Sasuke was attacked by the guard dog while GB fled with a dead duck in tow. However, Weed then appeared.

Noticing the hound’s condition, he fought desperately to save Sasuke; Banken turned his attention towards Weed and almost tore his throat out while GB watched from afar, he then realized how much of a coward he was. Weed had never met Sasuke before, yet he was still risking his life for him whereas GB had known Sasuke his entire life and was leaving him for dead.

GB then decided that he would forever turn over a new leaf to be more courageous and loyal, challenging the guard dog to a fight and thus saving Weed, but Smith, who saved GB from getting hit by a truck, turned up before the situation got out of hand, and scared the Tosa guard dog into submission. He then told Weed and GB about Weed’s noble heritage. GB then thought for a “small, but strong, name,” and named the puppy Weed, saying that he would never be alone amongst other weeds (representing his new companions). And from that day on, GB became both Weed’s godfather and one of his most devoted friends.

This may be because he is not as skilled at fighting than the other Ohu soldiers (in fact, throughout the franchise he has hardly been involved in a serious conflict). He tends to keep away from trouble whenever possible. Kagetora refers to both GB and Sasuke as idiots, GB is still not as open-minded (or as open-mouthed) as Sasuke. In episode 19, it was Sasuke’s reckless words that almost got them both killed when GB blundered too far into Hougen’s territory.

However, in this episode GB fights with considerable zeal in order to protect Sasuke from Hougen’s henchmen. This proves that, although at times he reverts back to his cowardly ways, GB is very much a reformed, brilliant dog when need be. At episode 25, after bringing the three generals of Hougen to Gin, he sees Hougen. GB then attacks him, and is later saved by Jerome.

GB’s spirit appears to Sasuke, who has been taken away from the fight with Monsoon’s kin as he is afraid to die. GB tells Sasuke to have the courage to fight back, as he did when he attacked the Hybrid Bear. Sasuke gains his courage and protects Kyōshirō, but is hit by the bear and badly injured.