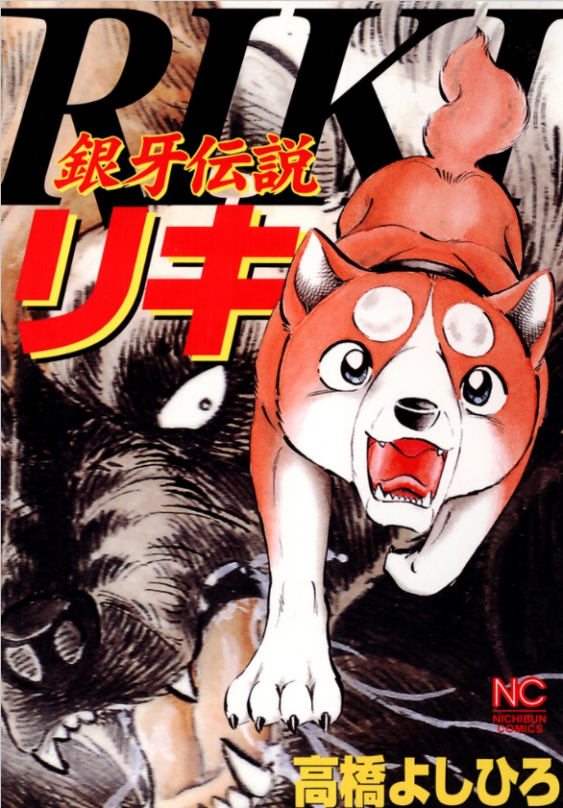 Ginga Densetsu Riki (Silver Fang Legend Riki) was first published in the magazine Weed World in 2001 to later be released in one volume by Nichibun comics.

Ginga Densetsu Riki has in 2007 been published into a second edition.

Riki is the son of Shiro, the strongest bearhound in Ohu and highly respected by both people and dogs in the village.

He was born as the runt of his litter, the only red pup, and was much smaller than his siblings. A month after his birth, Shiro’s owner Gohē Takeda showed up in a drunken stupor to collect one of Shiro’s offspring for training as a bearhound. Due to his inebriated state, he overlooked the tiny runt and instead selected the white puppy.

The remainder of the litter found new homes save for the runt, who was slighted for his small and seemingly inferior stature. Feeling sorry for him, his mother Yamabuki’s owner decides to keep him, naming him Riki – a “big, strong” name.

When Riki was four months old, Yamabuki’s original owner asks for her dog back to keep her company through her last days. Unhappy with the forced seperation from his mother, Riki attempts to run away from home and return to her side. However, he is spotted and attacked by Heiji’s pack of stray dogs. Although he manages to escape from them, he falls into the river and nearly drowns.

Luckily, he is rescued by Shiro, who feeds him and advises him to go home. After hearing Riki’s story, Shiro encourages him to become stronger and stand up for himself. Moved by Shiro’s words and his display of power, Riki returns to his owners and immediately starts to eat more, striving to get stronger.

A month later, while attempting to visit his mother again, Riki witnesses three-year-old Daisuke get knocked off the mountain highway by a truck. When the driver assumes Daisuke is dead and speeds away to avoid taking responsibility, Riki tries to call for help by howling from the top of a hill. However, Heiji and his pack find Daisuke’s location, and they attempt to kill him out of their hatred for humans.

Determined to save the boy, Riki rushes in and attacks the pack head-on. Despite being heavily outmatched, Riki’s bearhound instinct kicks in and he fights fearlessly, managing to badly injure Heiji and nearly kill one of his packmates. Before the fight can be settled, Takeda and Shiro show up, and a warning shot from Takeda’s rifle sends the dogs scattering. Takeda realizes that Riki has better bearhound potential over the white pup he had originally chosen, and Shiro proudly acknowledges Riki as his son.

From that point forward, Riki is officially acknowledged as Shiro’s son, his bravery in rescuing Daisuke earning him the respect and love of the villagers. Heiji’s pack gives him no further trouble, and he runs a hundred kilometers daily to visit his mother. Over time, he grows rapidly in size, becoming stronger and more powerful than ever.

By the time Riki reaches his early adolescence, there has been an increase in the number and severity of bear attacks in the mountains. By now, the killer has been identified as Akakabuto, an adult male with a dorsal stripe of blood red fur.

Along with three volunteers, Takeda and his entire pack of bearhounds set out for Mt. Kurikoma to track down and kill the dangerous bear before he can cause any further harm. Although he was left behind, Riki is determined to follow his father and runs after the truck.

Akakabuto proves to be a cunning adversary, luring the hunters into an ambush before picking them off easily. Soon, only Takeda and his dogs are left. Akakabuto lashes out at Takeda, striking him in the side of his head, and moves in on the dogs. At this moment, Riki surprises the bear by jumping from higher ground and latching onto his head. Impressed by his son’s courage, Shiro leads the other dogs to attack Akakabuto as well.

The dogs are killed one by one, leaving only Shiro and Riki. Regaining his rifle in time, Takeda avenges his dead dogs by opening fire on Akakabuto. The bullet pierces the bear’s right eye and lodges in his brain, rendering him mad and more savage than ever. Shiro then knocks Akakabuto off a sheer drop in a deadly fall to the valley below, sacrificing his life to save his master and son.

The bear, however, survives the fall and momentarily lays low to recover. Scarred and upset with the loss of Shiro, Takeda nurses a grudge against Akakabuto that causes him to obsess over bear hunts despite his old age.

Succeeding both his father and brother, Riki becomes Takeda’s bearhound, earning the same reputation as a legendary hunter just as his father did. Through Fuji, an Akita Inu belonging to Daisuke’s father, he sires his own litter of three offspring, one of which is a silver brindle.