This article is about the manga. You can view info on the anime instead. 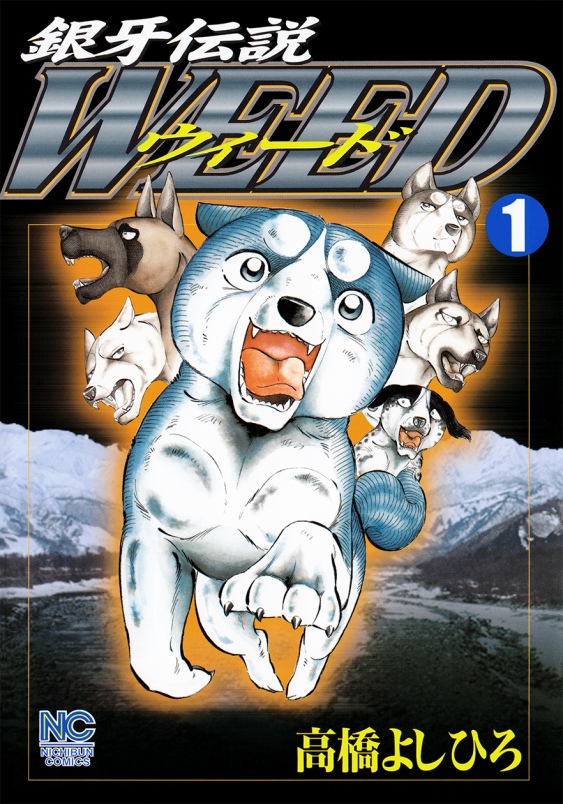 Ginga Densetsu Weed (Silver Fang Legend Weed) is the sequel to Ginga: Nagareboshi Gin, and follows Gin’s son, Weed through his journey to find his father and become an adult. The series was serialized in Weekly Manga Goraku from 1999 – 2009. 60 volumes were compacted from the run of the manga. It is second series of Ginga.

An anime adaption (of the same name) was released from 2005 – 2006, airing 26 episodes. The anime adaption however changed the story a lot and ended after the conclusion of the Hōgen Arc, leaving the remaining Arcs to be exclusive to the manga.

Weed’s journey starts as his mother, Sakura dies of an illness when he is only about six months old. He is adopted and named by GB, who is a subordinate of a local boss Nero.

Weed and GB start their travel towards Ōu to find Weed’s father, Gin, the supreme commander of the Ōu soldiers. On their way they meet many enemies and make new friends. As they arrive, they discover that Ōu is under attack by a vicious creature simply known as the monster. The monster turns out to be a gene manipulated dog which escaped from his laboratory and now eats humans for food and revenge, thus causing the humans to hunt after the dogs in the mountains, believing the feral dogs are to blame.

They join forces with Ken and Kagetora to free Ōu from the monster. Before the battle begins, they meet a German Shepherd named Jerome and his squad, North, Robert, Rocca, and Heuler

Their squad has been assigned to bring down the monster, regardless of the cost. Eventually our heroes join up with this squad, and they all go to bring down the monster together. The next couple of battles against the monster result in many casualties, including all of Jerome’s subordinates and Smith. Despite this the dogs (along with some last minute help from the humans Daisuke and Hidetoshi) manage to slay the beast. And for the moment, seemingly bring order back to the canine paradise.

After the defeat of the monster, another danger threatens Ōu. Hōgen, the tyrannical ruler of the Japanese Alps, has set his sights on Ōu and the entire Japan. He takes Gin and John prisoner while Akame rushes to Ōu to tell Weed what has happened.

Weed is declared the leader of the group due to his heritage. He starts his quest to gather more soldiers to save his father, but Hōgen does whatever he can to spoil this. Hōgen’s brother Genba takes over Ōu despite Kurotora and his nephews’ attempt to defend it.

Weed and his army faces their biggest challenge to reclaim Ōu as theirs. Gin eventually manages to escape his prison and gathers dogs to help free the paradise. In the end, Weed defeats Hōgen in a duel with the help of his mother’s spirit and he is declared the new supreme commander of the Ōu army.

The Monkey Arc is where Weed meets a group of Japanese macaques and wild dogs in a conflict. The problem is a baboon called Shōgun, the tyrannical leader of the macaques.

The first monkey they meet is only a baby: Pepe. He is being attacked by a red kishu/akita dog, Yukimura and his pack. Weed and his pack rescue Pepe and later hear about the conflict.

Later, Weed discovers that Yukimura is his brother and also he had another brother who looks almost identical to Weed, Joe. At the end, Yukimura and Shōgun are both killed.

During the spring, Weed meets a female kishu, Koyuki, caught in a hunting trap. She is searching for her little brother Kotetsu, who is later found being beaten by a rogue pack of dogs. He sets her free and they both fall in love. Weed eventually leaves Ōu and travels to Northern Alps to be with her.

Meanwhile, Jerome travels to Hokkaidō in search of a place where he can die a honorable death, but also discovers that Hokkaidō is being taken over by a group of war dogs from Russia, lead by major Viktor. Jerome is captured by the army and is taken hostage, where he’s guarded by a female lieutenant called Lydia. Jerome escapes and tells Hakurō’s pack about the problem, but then is captured again after Hakurō is killed.

Viktor and major Aram betray Lydia’s brother major Maxim, as Viktor turns out to be a traitor of his country, plotting to become the next marshal. Because of this, Maxim and Lydia end up joining the Ōu army.

After many battles, Gin and his pack become trapped in a gorge by Viktor and his brother, Bozlev’s soldiers. Maxim, after being almost killed by Aram is thrown to the pack below. Weed arrives with an army of pet dogs and they rescue his father’s group. The Ōu army then chases Viktor’s smaller army and they end up fighting on a beach.

Aram, believing that he killed and betrayed his former friend, eventually betrays Viktor and drowns him along with himself.

Weed meets his brother Joe, who has a big grude against his father Gin, for leaving their mother Sakura in the Alps to die, even though in reality Gin didn’t know Sakura had left and where she had gone.

Joe was thought to be dead, but he was rescued as a puppy by a hunter and he became a hunting dog with his pack friends. He tells Weed about the hybrid bear, who killed his mate and three of his pups, which left his last pup Kōshirō.

Weed joins forces with his brother’s group and Liger’s group to defeat the dangerous hybrid bears in Northern Alps.

During the last battle with the gigantic father bear, GB is killed protecting Weed from the bear. The bear and Weed fall into the river, where the bear drowns and Weed is no where to be seen and is thought to be dead along with Jerome. However, they later return to their friends and they go back to Ōu together, including Joe and his son.